One of the dejacusse/iBoD projects for 2017 is TRIC Questions, a sonic hacking of Terry Riley’s In C or TRIC. TRIC is comprised of 53 rhythmic/melodic riffs based in Nature’s Scale and set against an 1/8th beat pulse. My first pass through this piece was in 2014, when In C turned 50 years old. My approach was more historic then, so I listened to different versions of the piece, read about the composition process and wrote about the initial performances in 1964. Musician friends presented a slice of In C in performance that year, but mostly I explored In C through the Ableton Live DAW using different voices and tempo variations. For more on this, read the blog: My Year In C –here: judessoundlings.wordpress.com

During that year, questions continually jumped out of the piece. As I became more familiar with the patterns, they each took on a unique and identifiable voice. Then one day, while looking at the score of TRIC, I saw that this is simply one way these patterns can be put together.

What if each of the 53 packets of tones stands on its own, AND in relation to any and all of the other packages?

Using the patterns of In C as little Lego blocks of sound and putting them together in different combinations has become my approach to “playing” In C.  I want to hear all the sonic possibilities within this musical universe-for what else can you call it? It is not a song, but it makes songs. It is not a symphony, although it has movement and motifs. In C questions all the assumptions we have about in tune and in time when making musical sounds in the world. When we loosen our grip on what we think things should sound like and give our attention to what we are hearing, and what is emerging from our articulations within that hearing – whole other worlds open up. Those are the worlds I want to continue exploring. 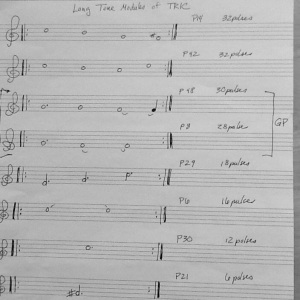 My first experiment with the long tones of TRIC was in November 2014. The question was how to use the long tone phrases to express tension and release. To hear the result of this experiment, go here http://wp.me/p4dp9b-bv. On listening again, I hear the C pulse frenetically undermining any possibility of release. One of the TRIC Questions I have answered is to drop the 1/8th note C pulse. Scoring the patterns precisely in Ableton Live creates a rhythmic underpinning for improvising musicians to play with/against, so the C pulse is unneccessary and unhelpful. Another reason to drop the pulse is that it is an integral part of playing TRIC, and I am no longer playing that particular iteration of these sound modules.

The eight long tone patterns  range in length from 6 pulses to 32 pulses. If all eight modules begin at the same time, there will be a sustained 6 pulse EF#GC [C(add#4)]chord. This could be achieved by triggering all the modules at once. Then, it would be interesting to peal away the patterns till only two remain. Which two patterns will be the final pair that plays this iteration out? One possibility is P30 and P21, which carries the tritone tension through to end. The other pair is P29 and P42, which creates the more consonant C major sound. Let’s try those two ideas. First, we end with P30 and P21. This sketch feels tense throughout. The denseness dissipates, but the tension stays high.

Next, we end with P29 and P42. Here the tritone tension is folded into a more harmonious blend by the end.

I have been so focused on the tritone carrying the tension, that I ignored the tension that half-tone, whole tone and minor third intervals inject into the scape. The final voices in the harmonious sketch create as soothing a combo as exists within this overlayering of fourths and minor seconds and thirds. So while it is soothing, there remains a sense of alertness within the release.

And, for my next trick, I set off that initial C (add#4) chord over and over, each time pealing away different layers to create a longer soundscape. Here is a 6 minute sound piece with five versions of pealing back to two patterns by the end. Each iteration ends with a different pair.

I love the feeling of fireworks exploding into that C (add#4) then the subtle changes that pealing back one part at a time makes to that chord. Then finally, there is a falling off of the expansiveness of the sound field and we are left with just two patterns rocking back and forth. Then – BAM – the C (add#4) explodes again. I love this!