At the Moogfest Volunteer orientation, we learned that the festival has changed hands, and that Durham is invested in growing Moogfest. I am gladdened to hear this news, and hope that it will be one of a myriad of festivals supported by our civic community. Each year Moogfest moves in different and interesting directions, embracing new venues, and improving their internal protocols. At the same time – it is a business. I hope that the owners prosper (within reason) and grow the festival in responsive and inclusive ways. This year seemed to be moving in that direction.

There truly was something for everyone at Moogfest 2018! One could listen to magnetic frequencies, experience 360 degree sound, hear an original Theremin (built by Theremin himself and recovered from a NC fleamarket.), witness remarkable performances by legendary Midori Takada and Psychic TV, and hear local talent like hifilorau, Trandle, Maille Form at the Roundhaus Stage and The Fruit. Those who sprang for The Engineer pass got to build a cool new synth called a Subharmonicon, which I would love to play with as it focuses on my main interest – harmonics. And the many workshops ranged from the democratization of music to how bacteria talk to each other. I attended a fascinating presentation on representing data as sound, which is a new interest of mine. (I am involved in a project where I will be creating some type of sonification of chemical reactions in fermentation – more on that in the future.) I learned the difference between audification and sonification, which had been a source of confusion. Projects where the data generates the sound are called audification. Projects where the data is represented as sonic information are called sonifications. My desire is to sonify data, so I will be using the resources from this workshop in the near future!

Midori Takada is known for busting through the glass ceiling in 1980s Japanese electronic music with her album, Through The Looking Glass. In Fletcher Theatre, she began with a simple brass singing bowl, moved to an array of cymbals and drums, and played a long set on the marimba. She was amplified and used a delay on some sections of the marimba piece, but was mostly acoustic. She is a consummate performer and knows how to take the stage and hold attention. (A Facebook post inquired about what designer she was wearing. A beautifully sculpted costume.) Later that same evening, I heard Madame Gandhi at Motorco. She could be the fractal repeat of Midori Takada – percussionist, electronic musician, performer and feminist fashionista who connects with the audience while she holds our attention. Both are modes of performance, one more traditional and exclusive, the other exploratory and inclusive. It was intriguing to experience both in the same evening. I look to Madame Gandhi who articulates The Future is Female and whose work is a reclamation of femininity. This girl is one to listen to!

The first morning of Moogfest, I went to the Modular Marketplace to play! The new Moog Grandmother synth was calling my name. This is a semimodular keyboard synthesizer with some cool features of which I only scratched the surface. At the Novation booth, I had great fun with the Circuit and their Peak synth. I shared my experience of playing with the Launchpad ios app with a Novation rep, and requested a live loop feature. He said he would take it to the developers. This year the Marketplace relocated from the Power Plant Boiler Room to Bay 7 at American Tobacco Campus – great decision! – a playground needs wide open space! The Modular Marketplace is a highlight of the festival and is open to the public, no wristband required. 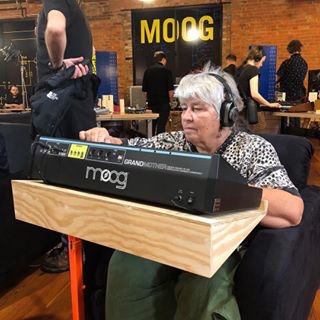 Micheal Stipe was back with another of his dance video projections. Thibault Dance was projected inside and outside the Snow Building on Main Street, tucked away in a sort of hallway. The dance projection was visible from outside the building, but the soundtrack (by Stipe) was only accessible from within. On the way home one night, I popped in there and was glad I did! The dancer explored the energy fields in and around his upper body with very little foot work except weight shifting and slight movements around the space. Gradually, he brought his lower body in more with leg lifts and kicks. Then it was over. I do not remember much about the soundtrack.

Susanne Ciani and Layne and several inidentified Berklee music students performed an original soundtrack for The Cabinet of Dr. Caligari. This event took place in the A3 360 Sound array in the Durham Armory. The soundtrack made the movie so much more interesting to watch and I was sorry I couldnt see the whole thing. I did manage to capture a most boring screen moment (written text to further the narrative) but you will get what I am saying about the soundscape.

I thought the sound at The Pinhook was stellar on Friday night when Katie Gately and Caterina Barbieri played fantastic sets there. Gately works with vocals and effects pedals, while Barbieri performed a full on Eurorack Modular Synth set. Barbieri’s style was to set up some nice arpeggiations and then mix them all up into a noisy mess before pulling out beautiful strands of sound once again. I enjoy that kind of movement in modular synth sets.

I blame the weather (which was rainy and overcast most of the weekend), but by Saturday afternoon I was done. Too tired to dance at The Fruit, which was a necessary disappointment. I spent Sunday working on the soundscape for Friday’s PROMPTS with Jody Cassell. (She has given me more meaty dialogue with her Mother. What they are processing is phenomenal.) Then we ended the weekend with iBoD’s traditional post-Moogfest soncert at The Bells. This soncert featured Eleanor Mills on the bells, Jim Kellough on digital horn, and Susanne Romey on flutes and recorders. I played the soundscapes, ukelele and psaltry. We had gorgeous weather, an appreciative audience and a generally lovely time stirring up the vibrations! I even managed a few minutes of a live Instagram feed till my phone fell over.