Eight months ago, the Elektron Model: Samples became part of my sounding board. (Here is a blog post about some preliminary explorations- https://wp.me/p5yJTY-Ch) When the MS started having key sticking issues, and the Global Reset rendered repairs inaccessible, the sounding board landed in limbo land. During this dreamy time, I realized/remembered that I want to play Control Voltages. The MS is a audio/midi device that can sequence synths that accept digital signals. CVs are another realm entirely! Although many synths can be stimulated by both types of signals, the depth and breadth of CVs is unparallelled to my ear.

Thanks to the flexibility of Sweetwater Music and the take charge attitude of my Sweetwater Sales Agent, Paul Allen, the MS (and a little cash) was exchanged for a Make Noise O-Control!! FINALLY, I have a voltage controlled modular set up as I pair this sweet thing with the Behringer Neutron!! Here you have it:

Today is the fifth day of play with my mini-mod, and I am happily patching, playing, studying manuals and/or Patch and Tweak, and deeply listening. Here are some sound samples from my first week’s play.

Imma gonna be here for a while… 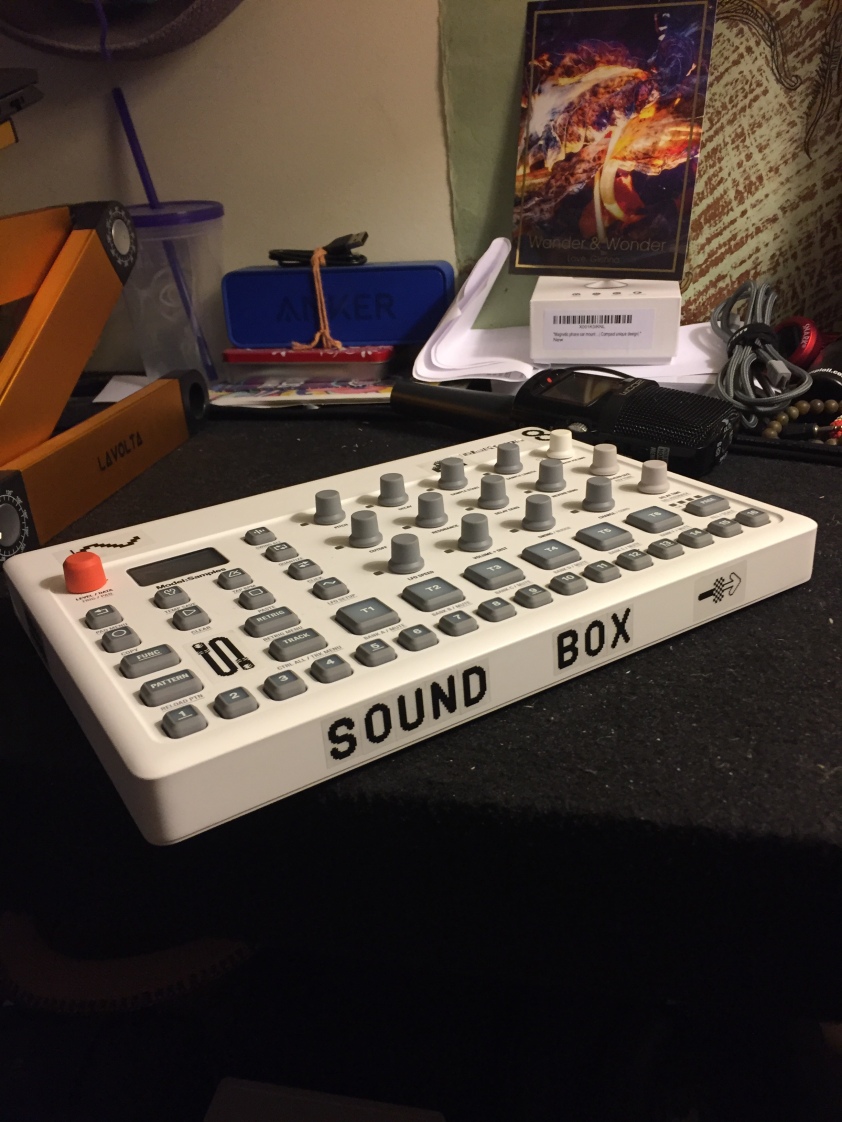 Sometime in November/December 2019 my earbrain decided we need a sequencer for the Neutron. While I was successful in getting Ableton to communicate with Neutron, I had to use the NI Komplete 6 audio driver, which seems to cause occasional sound dropouts, and feels like an unreliable set up to me. Anyway after extensive research, I settled on the Elektron Model:Samples. While it is geared toward creating drum patterns with 6 track pads/sample containers that can play patterns 1- 64 beats in length, I am hoping to explore its sound design/soundscaping capacity in addition to beat-making.

The Model:Samples uses buried menus, which I was not sure I would enjoy. I understand that the Elektron Digitakt has a deeper and more extensive menu listing. The M:S has just the right amount of menu diving for me. Most of the effects knobs are dedicated and can be modulated per track AND per trigger as well as over the whole pattern. The most any one of the buttons does is 2 or 3 functions. The deepest menu is the samples menu. I want to spend some time getting to know the cool samples that came with the M:S. However, I have spent most of my time with M:S creating and loading my own samples.

As example, one sound clip of a plaintive horn riff became the one and only sound used in a pattern called Plaints. By changing the start and end point of the sample, varying the delay amount, frequency cutoff and reverb time within each track, each one sounds different from the others. I played with this at The Shadowbox Sessions in January and now want to do more with this pattern.

Elektron Transfers is the software for loading samples into the M:S. As I collect and curate samples, it seems best to organize them into 6 pack folders. This way I can load a whole folder into a saved pattern slot. I have not yet figured out how to see the samples that are already in the box. Samples can be deleted through the M:S menu. Samples can be changed out while playing, which is a very cool feature. A pattern template can be completely transformed while it is playing by placing a different sample on the track.

One thing I am interested in exploring more deeply is setting effects modulation on specific triggers in the pattern. As example, the first trigger could have a low pitch with a LPF and heightened resonance AND only play 25% of the time. The 14th trigger might be a higher pitch with delay and feedback. These two sounds will express so differently yet they are coming from the same track sample. Wild! This is the arena of creating sound PAINTINGS! How to orchestrate sounds within a grid pattern and NOT have them create a groove? How to use these parameter locks to create a moving and changing “pattern” within a fixed grid of 1 – 64 triggers/beats/notes.

My challenge this week is to work with this idea in preparing the soundscape for the Human Origami Jam this Friday January 31, 2020. First, what sounds do I want to explore? Then, how can these sounds be triggered and mixed into a morphing pattern that does not sound like a groove? I will report back next week as to how this has developed.

If you have any interest in Elektron Model:Samples, I highly recommend True Cuckoo’s tutorial. I watched this multiple times before the M:S arrived, and was able to jump in and make stuff immediately.