Being an introverted elder, I am no longer the festigoer I once was. One festival a year is enough for me and this is it! Moogfest is an incredible sonic universe that opens up in and around Durham, and turns my world upside down. This year was no exception!

There were numerous durational performances, sound installations and interactive opportunities. I was particularly excited to meet Madame Gandhi, who gave a fabulous performance at Motorco last year. This year she lead two sessions of interactive play at The Fruit. The set up included a Push, a Bass Station, a drum set, microphones for vocals and small percussion, and two synths! WoW! She wasted no time with alot of talk. We jumped right in and started playing. I really appreciated that! I played Push and did some vocals, but mostly listened. The group came up with some nice grooves.

This experience reminded me that I prefer solo or small group playing these days, and the energy of the experience was fantastic! Glad I showed up!

21C was my favorite venue this year. I heard a wonderful variety of soundscapes there in quad sound with excellent sound engineers, a beautiful light show and interactive screens on either side. The bookends of the weekend for me were Ultrabillons and TRIPLE X SNAXXX (local favorites). Both of these sets were incredibly satisfying to listen to. Big synths and bouncy modulars all around. What I come to Moogfest for!! In between there was Aaron Dilloway who gave an amazing embodied noise performance that was as much exorcism as anything else. Drum and Lace started her set with some whispy songs that all seemed to be the same short length, like 3 minutes or so. But then she launched into some beefier pieces and really took the space. She had some gorgeous videos behind her as she performed.

Cuckoo was so much fun and I envied him his tiny set up which he carried into the venue in a knapsack. At one point, he was playing a vampy section and said, “well, this is the point where I introduce the band!” and proceeded to show us the three small controllers he had routed together. He has YouTube videos, so I want to check him out. Here he is playing at The Pinhook.

Finally, I had a few mind-opening, inspiring encounters. Steve Nalepa pointed the way to route signal out of Ableton for quad speakers. He performed at 21C through quad speakers using Ableton. I always wondered why you would route tracks to sends only in the I/O menu. I havent yet tried this, but plan to soon. Then there was the Modular Marketplace! I delayed going till Friday and spent 3-4 hours there playing. As the WoW would have it, the modular unit Behringer Neutron was on sale for $100 off. I struck while I had a little cash flow. Less than a week later, Abe, Nuet and I played a beautiful primal soundscape for Audio Origami on Friday May 3 at ADF Studios @ 4:30pm.

Thank you, Moogfest! See you next year! 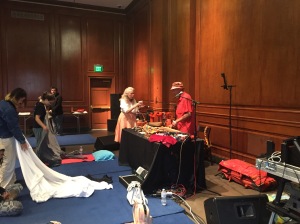 Once again, Durham burst into a cacaphony of electronics and technology as Moogfest took over the downtown streets and venues from May 18 – 21. Last year, there were more “big names” and a strong emphasis on “living as a cyborg” i.e. augmenting our perceptual apparatus (brain, ears, eyes, bodies) with technology. This year’s festival felt more low key, but at the same time, just as rich and varied.

I opted for the volunteer experience again, which gets you a free ticket as long as you work your shift. My shift was box office for the sleep concert, which ran from 12:30 am to 8:30 am the first night of Moogfest. In the ballroom at 21c Museum Hotel, thick mats covered much of the floor.  Attendees, some in hotel bathrobes with pillows and blankets, some with mats and sleeping bags, waited in line to get in. As it turned out, everyone who waited got in because only a dozen people from on-line registration showed up. My job was to scan wrist bands, do a clicker head count, and keep the entryway quiet.

Laraaji and Arji OceAnanda created soundscape all night long while people came and went and slept. They started with some overlapping synth loops that were quite dense. I wish I had been inside the room to experience them. I imagine they would feel like a blanket tossed and tucked around me. Some people found them too loud and left; others went in, lay down and immediately fell to sleep. As the night went on, Laaraji and Arji moved us through watery realms and meadows of sheep and crickets making song. Occasionally, one of the artists walked around among the sleeping, sprinkling light chimes of sound over them. There were poems about walking in the garden of Now and being consciousness. This was an eight hour blessing!

As the sun was rising over Parrish Street, Laaraji played a sweet harmonica solo. I lay down for a while, which was wonderful. The sound was quadraphonic, so the water sounded as if it was in the middle of the room. It was like lying beside an actual lake. As the last half hour approached, we pulled back the curtains, danced and chanted Om Shanti and I am Consciousness! When we left the room, someone from Moogfest had brought in coffee and doughnuts! Whooo hoooo! The sleep concert was a highlight of the festival.

The next highlight was meeting Gerhard Behles, one of the originators and the CEO of Ableton. He gave a moving talk on the visionary mission of the Ableton company. He started with his own story of how electronic music saved his life as an unhappy teenager. His gratitude for this has brought him right where he is today! Ableton has a mission to make music creation accessible to all. He is a kind, creative and engaged man, and I am glad I got to shake his hand and express my deep gratitude for the sounding world that Ableton has opened up to me.

Sudan Archives at the Presbyterian Church was a delight. She played electric and acoustic violin over loops. She had a lovely voice and was unselfconscious and genuine! Many of her songs seemed like works-in-progress, surprising the audience with their brevity. Then she carefully laid out loops of tapped tones on the violin strings, and sang a vocal line over top in a beautifully sculpted improvisation. The church is a breathtaking venue visually and acoustically. So glad I got to hear Sudan Archives there.

I ventured down to the Motorco end only briefly to hear Omar Souleyman. The pulse of the music was inviting, so I moved closer to the stage, but got caught by the low end about half way down. Punched me in the stomach and throat and I could go no further. The sound is just too loud. My constant question is “why are the bass/drums allowed to dominate the show at such a great cost to the felt-sense of the music?” Last year at The Armory, people reported getting physically ill from the bass. It is these moments in life when one must ask, “What is happenin’ here?”

I was so into Laurie Anderson last year, that Suzanne Ciani was only a moment of my festival. This year I gave her more attention, and am glad I did. The documentary A Life in Waves is one of the best biographical docs I have ever seen. Suzanne is a self-contained, independent, intelligent woman who comes across as soooo comfortable in her skin.  My favorite aspect of the film was that it gave you a sense of how deeply attuned her ear is to the world. As she revealed the metaphors of her life, the filmmakers mined them beautifully. A wonderful collaboration! Suzanne Ciani was honored with the annual Moog Innovation Award at Moogfest 2017. And she played a set at The Armory on the Buchla which was fun and engaging! When I think about Laurie and Suzanne, who are contemporaries and probably acquainted, they seem to be the antitheses of each other. I admire them both for the ways they sound their beings into the world!

Then there were the stumble upons:

Marc Fleury and the Church of Space going bullhorn to bullhorn with a local corner street ministry down at Five Points. They got real quiet when Marc (in his mask) bellowed, “Of course, there is a God!” I don’t think the locals were expecting that.

Pierce Freelon and a group of teens getting their rap on at CCB Plaza Friday night.

Another peak experience was Lily Dale -The Dream Wanderer Virtual Reality Bus. Lily Dale is a spiritualist community of ghosts and mediums that actually exists in upstate NY. The VR experience was a kind of guided meditation using the voices of people from the Lily Dale community in conjunction with movement and graphics. There are numerous scenes you can experience, so the first thing is to pick three random original tarot cards to determine which scenes you will…be in. They place a vest over your torso, headphones and goggles over ears and eyes and you are off. One of the scenes I went through had to do with traveling outside the body, something I have only done in quick snatches. The visuals for this were stunning – I felt I was stationed in the cosmos. I could see the the shapes of planets in alignment or in their orbital relation depending on which direction I looked. There was a large Earth-like planet moving toward me 45 degrees to my right. Then it was like I passed over a dark hill and below me was a swirling galaxy. I saw a human form float by like a sister airplane flying at a different altitude. And all the while the planet got closer. (I thought about that movie Melancholia, and that gave the visuals a creepier feel.) Then everything faded away. Each scene is accompanied by a story or message from a Lily Dale resident. The experience felt healing and uplifting. For more on this project, check out: http://flatsitter.com/lily_dale/

Finally, we concluded with iBoD in the Soundgarden on the Sunday evening apres Moogfest. Suzanne, Eleanor, Jim and I arrived at the Central Park School and got partially set up before discovering our power source was not hot! Electronic music does not happen without electricity! (I see a solar generator in my future.) So we improvised along with the bells for about 40 minutes to a small and appreciative audience. Later that same night one of our savvy audience members discovered a power source just slightly further away, so we have rescheduled our soncert for Sunday evening June 4th at 7 pm.

Meet us in the Soundgarden then!