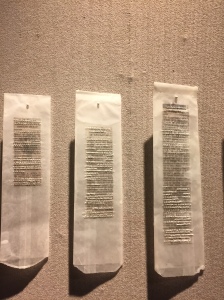 While Jody Cassell moved the energies across the room, Shana Adams, Morgan Fleming and I sounded around her. The sound reflected and supported Jody’s movement. In this excerpt, Jody was reaching for lost conversations, while Shana sang the words from Megan Bostic’s piece I Lost The Conversation, and Morgan and I stretched tones. I wish I had a video of the movement Jody responded with during this piece. It was a most beautiful fusion of visions.