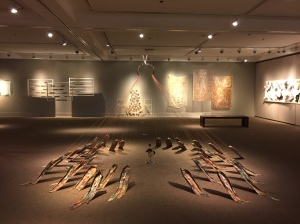 Jan Ru Wan and Megan Bostic collaborated on the current DAG show entitled Reconstructing Existence: I Create Therefore I am which will run through August 12th at the Durham Arts Council. This coming Friday, July 21st, Jody Cassell will present a movement piece in response to their work. Jody will be accompanied by dejacusse’ new soundscape The Drone of Aggrievement along with improvisations by vocalist Shana Adams and Morgan Fleming on violin. The performance will run from 7:15 to 8ish.

The art that you will experience that evening arises from a deep grief that enveloped the artists following the loss of a parent. Jan Ru, Megan and Jody have discovered mediums, forms, textures, patterns and relationships through found and intermingled objects and movement to allow their grief a public expression. Each person’s journey with grief is a singularity that we can witness and resonate with. The graceful power of these expressions of grief invite the audience members to reflect on their own grieving.

This is the third collaboration for Jan Ru, Jody and I; and our second with Megan. The first was in 2013 in the Seimans Gallery at Durham Arts Council. Resolving the Disquiet was the raw stage of grief where the memories of the parent’s presence and the shock of their loss was felt. Then last October at VAE in Raleigh, Jan Ru Wan created Separation and in-between an installation that was about reflection and connections across time and space. Jody and I improvised movement and sound offerings for both of these exhibits. Here is a link to more about the VAE show:  http://wp.me/p5yJTY-fd

The DAC show focuses on a renewed existence through creativity. The grief remains but brings energy and muse in relation to “what is.” The show is beautifully curated and very sculptural. 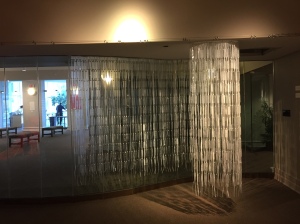 For this exhibit, I was inspired to create a drone in a carnatic scale that begins on Bb. Bb is the tonal center of much of the natural world. Cricket and frog calls, cicada songs and other more drone-like nature sounds tend to resonate in B or Bb. The drone is made up of long tones from this scale in large interval relationships. The 11th Harmonic is worked in to help disrupt any stuck energy.  I chose voices that pull at the heart (woodwinds and strings) and created audio effect racks to destabilize and texturize the sound. Wind is a featured sound texture along with snipping scissors, keystrokes, and Jody’s voice reading bits of her performance piece  Walking to Nairobi.  Shana and Morgan will improvise along with and independently of the soundscape – all as accompaniment to Jody Cassell’s dance piece. 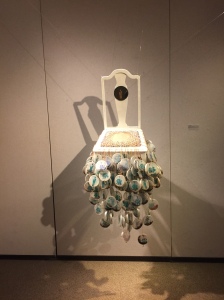 Please join us this Friday, July 21, at the Durham Arts Council DAG Gallery at 7:15 pm.