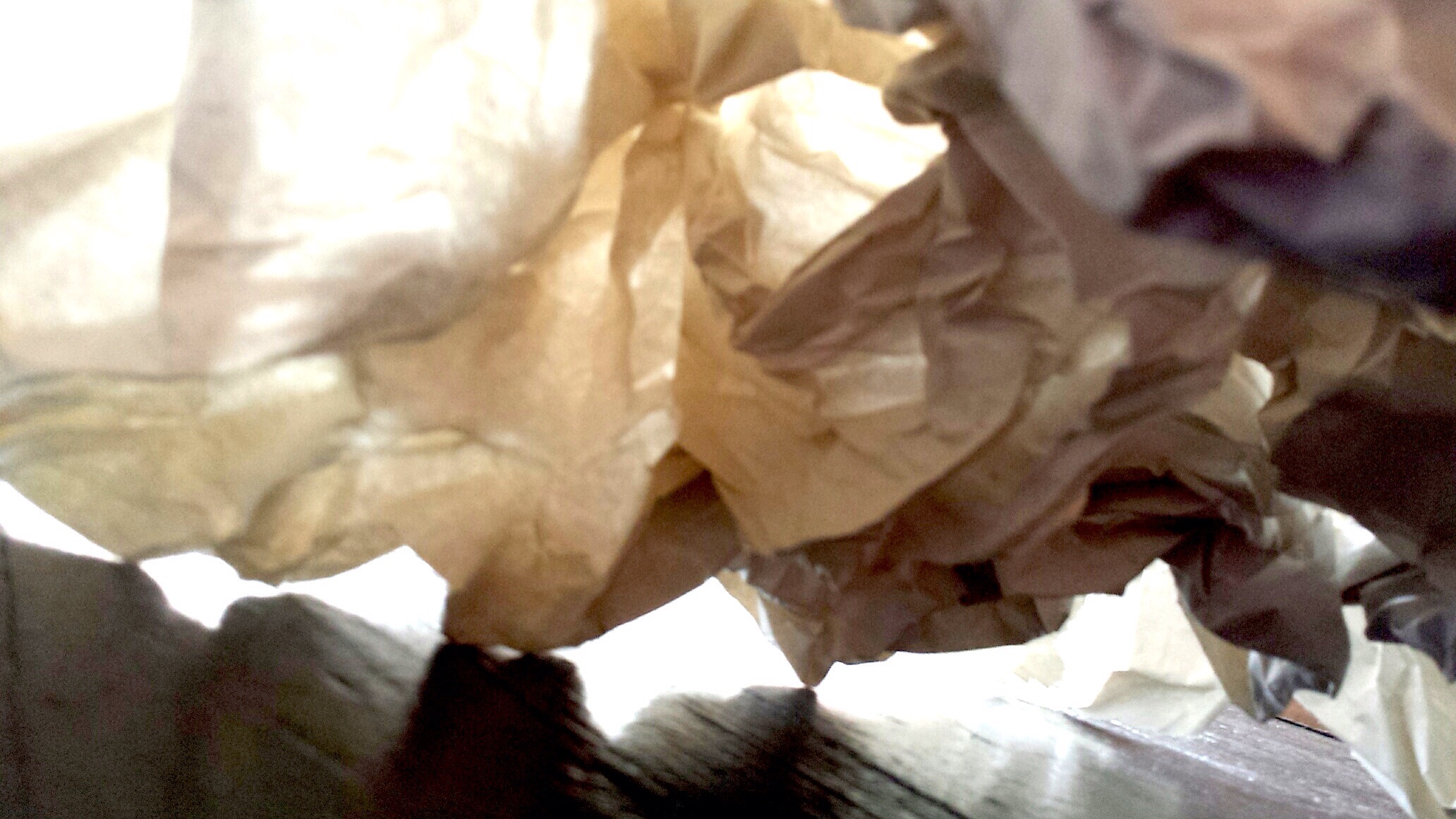 Folding/Unfolding at The Carrack Gallery in March was the first exploration in creating sound as origami in acoustic space. The soundscape accompanied Glenna Batson’s workshop Human Origami, which is conceived as a long form movement exercise in folding and unfolding the body in partnership with fabrics and textures. My approach to the soundscape was to create folds in the sounds through rising/falling tones, through voicings with longer decay, through amplitude ebbs/swells, and through acoustical comb filtering. Here are some samples of these effects from the recording of that day (I particularly enjoyed playing to the train “whistle” that came through at one point and playing with the creaks and groans as the dancers moved across the old wooden floors):

I analyzed the waveform of the soundscape using the Sonic Visualizer and a spectrum analyzer. These programs give me access to the amplitude measurements and the frequency measurements captured by the Zoom H2n microphone. One effect that appeared was an indication of folds in the amplitude created by swells and voicings with longer decay. Here is a picture of one section that highlights this effect:

I was very happy to see this folded impression in the amplitude waveform. This image confirms that these two techniques do create a kind of audio fold, so I will continue to explore with these techniques.

The frequency waves are the next layer of folding and can be observed through spectrum analyzers. This is more complex domain as frequency over time consists of fundamental tones with accompanying harmonic and enharmonic overtones. Looking at the soundscape as it unfolded in time and space, I was able to note a 40 hz fold as well as jumps in the fold at 14 Khz. When the scape was more percussive, the entire  spectrum behaved like a whip, with the jump at around 40 to 60 hz creating a wave effect that seemed to stop in the mid-range and then undullating up from 11 Khz to 14 Khz. Here is a video of that effect in motion (very noticeable on the last 15 secs of the video):

When the scape had more low pad drones with tonal voices such as woodwind or guitar providing the rhythmic momentum, the waveform was in a steady state across the spectrum with the tonal phrases creating quick blips in the wave. Since the next exploration of Human Origami will add ruptures and rips to the folding/unfolding process, this steady state frequency base with tonal ruptures in the waveform will be a technique to explore.

The comb filtering aspect of Audio Origami at The Carrack was not successfully rendered or captured. This was due in part to the unexpected large stack of boxes in the middle of the gallery on the day we presented the workshop. The boxes covered approximately 36 sq feet and went almost to the ceiling. They were part of the exhibit that was in The Carrack at the time. The boxes created an interesting shape for both the movers and the audio. I proceeded with the plan to point one speaker directly at the window to create strong early reflections, and those reflections were absorbed, refracted and diffracted around the space by the boxes. On one side of the room the boxes were between the larger speaker and the reflecting speaker, causing the early reflections to sort of travel around a corner. The boxes helped to make the experience of the soundscape quite different depending on where the listener was in the room. Given the way that sound moves through and around objects, I am certain there were myriad folds in the layers of tones as they reached the dancers.

The participant feedback on the soundscape was encouraging : “exquisite”, “primitive”, “a confection of music”, and (paraphrasing) supportive of the movement more often than leading the movement.  Several of the descriptors were very much a part of the intention of the soundscape, so I have a good grounding from which to move forward into the next experiment in Audio Origami. This workshop will take place May 15th at The Joy of Movement studios in Pittsboro, NC  from 2 – 4pm. The focus of this workshop is moving with paper, which holds its form in a way that fabric does not, and is also more prone to tearing and rupturing. The contrast will be very interesting for the movers and will be compelling to explore in creating the soundscape.

I hope you will join us in the journey.

One thought on “Experiments in Audio Origami: Observing Sonic Folds”